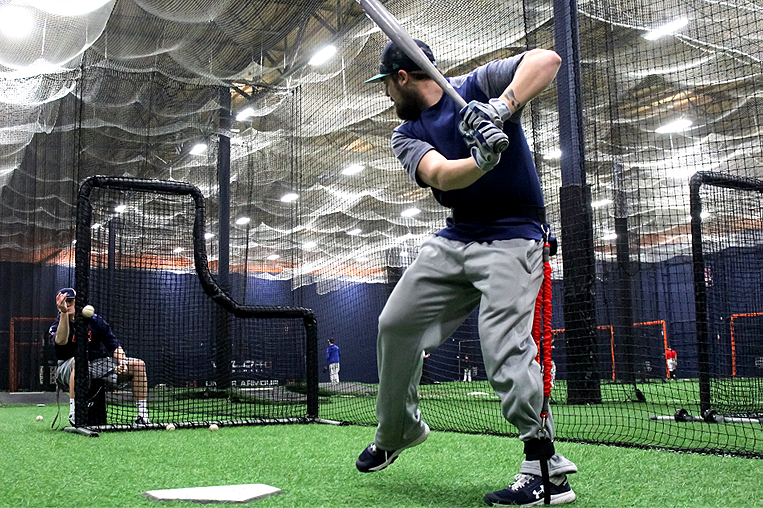 How To Be A Hitter & Not A Swinger

Founder and former MLB pitcher Jim Parque was 9–5 with a 3.78 ERA in the first half of his second year in the Major Leagues. However, in the second half of the MLB season, he did not win a single ballgame. This led to a search to understand what Hitting took at the big league level.

And so Parque met with all the games greatest hitters in Derek Jeter, Edgar Martinez, Manny Ramirez, and many others. He also learned from teammates Frank Thomas, Albert Belle, and Magglio Ordonez.

Parque also hired out famed hitting coach Von “the hit doctor” Joshua and asked him to teach hitting. Joshua was the White Sox hitting coach when Parque pitched there.

These one-on-one meetings, training sessions, and being a pitcher in the American League provided invaluable insight into what it takes to hit good pitching. Additionally, it divulged some consistencies that all great hitters possess or are trying to attain within each at bat.

As proven time and again, the game has changed in the past 120 years, but the human body has not. This is why we see the same movement patterns from Ted Williams to Bryce Harper. No matter the era, mound height, nationality, or performance requirement — human movement patterns for hitters remains the same.

WHAT THE GREATEST HITTERS ARE TRYING TO DO

As described above, VeloPRO Founder and former MLB pitcher Jim Parque met with all the games greatest batsmen. And here are the consistencies they talked about:

1. Plate coverage. The number one thing ALL stated they were trying to accomplish with anything they did during practice or performance was create plate coverage. When they were in a slump, they felt like they were swinging 20 inch bats. But when they were going good, they felt they were swinging 40 inch bats. Reason being is that their barrel was (1) getting to the zone quicker, (2) staying in the zone longer, and (3) back hip and load rhythm was matching the pitcher.

4. Game plan. Every hitter is different, but they all had one common thing in mind — what they wanted to do and when to do it. The more often they could remain within this game plan, they more often they produced.

5. Back hip drive. Everybody talked about their back hips and how they played a crucial role in their offensive production. Lazy hips were the biggest contributor to slumps. The crisper and quicker their linear hip movement, the more they produced.

6. Hands, Everyone knows that keeping your hands back equals great hittability. All hitters discussed how they worked at syncing their hand movement backwards to their back hip drive forwards. If they were slumping, they would move their hands too early back. If they were producing, their hands reached back at the point of front foot strike. But getting this sync down was something that all struggled to maintain on a daily and inter pitch basis.

7. Hips. NO hitter talked about hip rotation. In fact, all stated that the more they worked hip rotation and sync of it to their linear drive, the more they failed. They all stated their hip rotation was a byproduct of everything else gone right and did not want to “mess” with it. Contrary to popularized hitting training, the greatest hitters in the game do not directly train hip rotation, but only worked upon it to understand its functionality within their swings. Additionally, most stated they would slump when their hips were the focus of training.

8. Feel. All hitters discussed feel and how it played into their performance. The more analytical they became, the less production. They would rather feel the movement, than see it. However, they utilized technology considerably — but only to vindicate or divulge. Today’s training puts technology above problem solving an feel.

ARE YOU EXPERIENCING GREAT PRACTICE AND POOR PERFORMANCE?

If you are a “cage bomber” or 5 o’clock hitter whom just cannot take his great practice BP into the game, then you are experiencing movement and hit-ting deficiencies:

1. You have a different BP approach. Take the “everything is a strike” approach into the game so that you do not let good pitches go by before you get comfortable.

2. You are not working in BP. Every great hitter takes each swing and tries to do something different with the baseball. This is the difference between the minor leaguer or big leaguers. Just watch pregame BP and you will be able to pick out the starters because their BP is about spray, situational hitting, and working swing movements. The minor leaguer just showcases.

3. You are training mechanics and not hit-ting. To hit is to have plate coverage against all types of pitches in any count. Swing mechanics are important, but there are just as many bad mechanical hitters in the big leagues as there are good. Train how to hit the baseball and what to do with each pitch instead of your swing.

4. If you are getting jammed in hitting counts, you are thinking too much. Remember that if the greatest hitters in the game are looking for one pitch in one zone, you should do the same. Pitchers do not get your out, but you get yourself out. Reason being is you are thinking about past or future situations — rather than sticking with your own game plan.

5. Stop trying to do so much with the pitch. The greatest hitters in the game are not trying to pull or go oppo with pitches. They are just trying to make good contact within their game plan. You accomplish this by (1) having a game plan that matches the pitcher and situation, (2) gaining plate coverage, and (3) not allowing the pitcher to change what you want to do. See pitch and hit it, but you have to train this before you can perform it.

6. Your swing is not matching the pitching level. Meaning, you are either trainin at slower speeds and not building reaction and recognition into your hitting, OR your hand speed is getting overmatched. Remember that you must be able to get your barrel to the pitch and if the pitch velocity is overmatching your barrel speed — you have a problem.